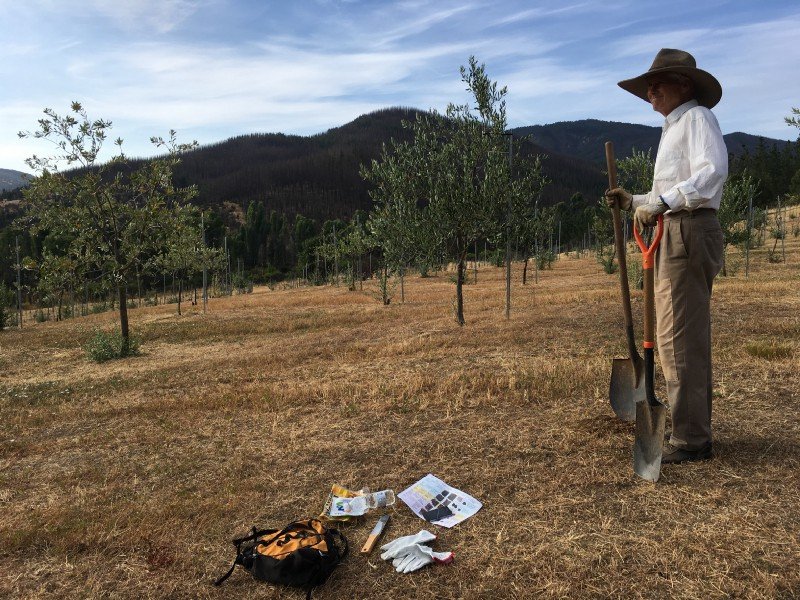 Sunday morning early my dad and I went out to observe and investigate our soils on our farm in Chile. As you may know 2017 was a very difficult year for my family’s small farm as the mega fires in Chile consumed our farm, burning all our crops — olives and vines, just the buildings survived. Come November (Spring) it became obvious that most of the 8000 olive trees and 2ha of vines were dead or growing back from the ground. In terms of having a crop, it’s a bit like starting again.

It is at times an overwhelmingly dire situation. But there is no point lingering on the negatives as this is what’s happened and mega fires are bound to happen again based on global trends, so we must rethink.

Where to start? The soils. If there is one thing I have learnt over the last year, it’s that soil health is the litmus test for the direction your farm is going in. For fire prevention we see two ways forward: Either we bite the bullet and plough between all the trees and build fire breaks around the whole farm (100m wide!?) — a disaster for soil health; Or, we make our 700ml of rainfall each winter go further and retain moisture on as much of the farm as possible, for as long as possible, allowing a green ground cover all year round. Neither sounds particularly easy, but as the realities of the changing climate and human impact on our landscapes intensify — we have little choice. So we are opting for the latter, as the first sounds like a barren nightmare.

To systematically observe our soils and document where we are at now we used Soilmentor, an app I recently launched, along with the Pasture-Fed Livestock Association and soils advisor Niels Corfield. I’ve used the app on a number of other farms in the UK (read more about them here) but this felt like a seminal moment using it on our own farm in Chile for the first time. This app is just part of my commitment to ensuring smaller-scale farming businesses around the world thrive, building a more resilient future for us all. In an odd way, it felt very moving to have this tool support our farm, especially at this moment of so many unknowns! I can’t explain but when you go out and really observe the soil, something happens, you become immersed in a whole new dimension of the farm. This is why I think farmers such as Ian, Fidelity and Tim have also been so excited using the app, doing the simple soil tests themselves — we are empowering farmers to take the ‘pulse’ of their soils.

Back to our farm. Doing the tests. We went to 3 fields and dug a hole as best we could at 3 sites in each field. At first it felt incredibly daunting looking at the different tests in the app. I am still learning about soil science, so many things I don’t know! How deep should we dig? How many samples should we take? How can we tell where the top layer of soil ends and the bottom one begins for the VESS (Visual Evaluation of Soil Structure) test? And in fact how can we determine aggregates* from clods* in this incredibly arid soil? Luckily many of those questions are answered here.

We gave it our best shot, followed the notes on the VESS diagram and gave the top layer of soil a slightly higher score than the bottom, determining it was just 1cm deep — that’s where almost all of the roots were and some evidence of aggregation. We had to use a hammer to cut down into the soil, so Spading Ease was definitely 1 (the worst). As we moved on to the next hole it got easier to assess VESS and by Sector 2 we felt confident scoring our soil. Here, in Sector 2, things were quite different, the top 5–6 cm were top soil and showed definite signs of aggregation but then beyond 6cm the ground was almost impenetrable. In Sector 7, we were amazed the spade went in easy after the initial top cm or so. It was completely different again, a crumb-like soil all the way down, quite red, but oddly little sign of microbial life or root activity.

For each VESS reading we took two photos of the soil, one before breaking it up and one after. Later this week I will be talking through the results and photos with soils advisor Niels Corfield in the UK to better understand what it all means and how we might move forward in terms of management. Pretty exciting that we can so easily share the state of our soils with an advisor. We brought back samples from each field and did a slake test, Sectors 1 and 7 mainly disintegrated but as expected those from the top layers of Sector 2 stayed glued together. I did question whether the slake test would work for such dry soils, maybe they wouldn’t break down because they are baked into shape…or they would disintegrate completely because they have no moisture in them to keep their shape? Always so many questions and variables. But as we looked over the tests 24 hours later it seemed pretty obvious. Only Sector 2 had any real sign of the soil being stuck together thanks to microbial and root slimes (good stuff!) — it stayed completely intact. Sector 1 disintegrated partially and Sector 7 completely disintegrated. An interesting indication that the light crumbly soil in Sector 7 probably isn’t thanks to great soil creation from plants and microbes but a combination of other factors in the short term (it was dug up most recently of the 3). But I’m not sure on this one so will be asking in the group convo what others think!

The whole experience was rather brilliant, my dad and I in conversation about our soils, really looking and recording whilst we go. We now have begun to understand what we are working with and that the mechanism for living soils is not currently in action on our land. The next step is how to get that mechanism in action as soon as possible. Currently we are considering direct drilling with multi-species herbal leys, grazing lambs in Spring, or maybe chickens all year round. We also want to use compost teas to move the soil health more quickly, as a short term input. If you have any other suggestions please let us know 🙂

How will we test if things are getting better? Well if our VESS top depth begins to increase and the score goes up in the bottom layer, if we start to see rhizosheaths, if we have even one or two earthworms and if we have all 3’s on the slake test then we will know our soil health is improving — it seems like a huge challenge but we believe it’s possible. Let the work begin!

Soilmentor is now available for anyone to use to investigate and monitor their own soils — find out more here. Join a community of farmers working together to monitor our soils and improve soil health!

Get started with Soilmentor
Sign up for our newsletter
Login to Soilmentor
Reset Password
Enter the username or e-mail you used in your profile. A password reset link will be sent to you by email.