Edaphos offers agronomy services on all types of farms in all situations. Their philosophy is to improve soil and plant health, whilst harnessing the soils stored resources to their full potential to achieve a healthy, well balanced system.

Increasing biocontrol on farms by raising awareness of the beneficial insect community could lead to reduced pesticide use, costs and better support our own environment. In this blog we will be focusing on Spiders (which are arachnids and not an insect but certainly a most valued beneficial predator) through conservation biocontrol!

Before going into Spiders in detail, it is important to understand that to enable conservation biocontrol it is a direct focus on increasing the numbers and diversity of naturally occurring beneficial insects that are already within the area. To create a successful biocontrol through conservation alongside farming, predators and parasitoids need to thrive more so than in smaller production systems due to the fact that fields are subject to a whole host of management from us through mainly pesticide use, tillage, baling, mowing of margins and the management of field borders. Because a lot of fields are subject to the above, they don’t provide enough shelter, forage and overwintering habitat for many of our beneficial insects that would provide us with the wonderful benefits of pest control in crop and as a knock on effect, this also has an impact on other wildlife, pollinators and birds that are in a declining population.

The focus of conservation biocontrol is to focus on creating the necessary food and shelter and any other needs that has been proven to increasing numbers of beneficial insects. Once these are in place the biocontrol system will continue to develop and persist year on year as natures cycle of life and natural balance take place.

Back onto the Spiders! Hopefully over the winter and into the spring, many of you will have experienced spiders while walking crops, alongside margins or noticed a glint of an expanse of webs across the crop that is most noticeable at dawn and dusk which is a great sign and start to creating your biocontrol community. 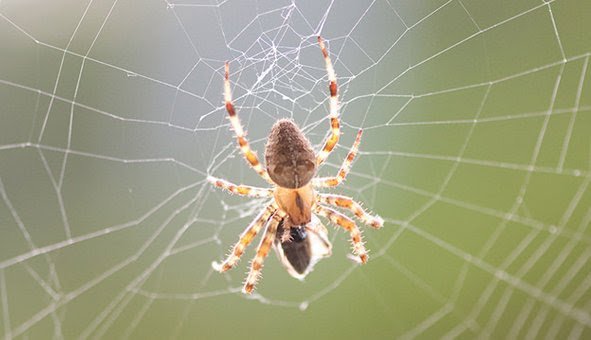 Spiders are often the most abundant predator in agriculture although they play good and bad roles towards our purpose. Spiders are generalist predators which may feed indiscriminately on other insects and as you might expect for certain species their webs can cause chaos to any insects that fly.

Spider life cycles vary a lot between Arachne species, from species that have one generation per year and live for 2-3 years to those that are very short lived and have multiple generations per year. Spiders may lay eggs within silken nests in the soil, grass clumps, plant debris, under bark or inside hollow stalks of vegetation which these are the areas the adults also overwinter in as well.

For web-spinning species, vegetation as crops and weeds or a soil surface with adequate trash to create a diverse architecture provides a suitable habitat and hunting ground to spin webs. Leaving trash on a more cloddy surface with straw still standing helps retain web-spinning spiders in the autumn and the presence of the diverse architecture from the crop and arable weeds provides a suitable hunting ground in the spring and summer. Some web spinning spiders are capable of producing a long thread in which they can disperse themselves over long distances in a process called ballooning where they are carried in the wind. Web Spinning Spiders can offer us the first and one of the most effective controls against aphids in the autumn by covering whole fields in their threads from ballooning into and across the field. When they are present, you can easily see how and why they are so effective at aphid control and not many pests would get through their hunting grounds.

For the hunting spiders such as Wolf Spiders and Jumping Spiders, they don’t rely on creating a hunting ground with their webs and will persist generally along field margins, hedgerows and plant foliage to hunt on the ground and will travel 50 metres into the field from these areas.

It is important to know that the more mobile species of Spider will only settle in locations with sufficient levels of prey and as such will show responses to prey densities. If you do not have the diversity or insect populations spiders will not be abundant.

To encourage the establishment of spiders you will want to integrate field margins as hedgerows, grass and pollinator strips into the field. Splitting fields with beetle banks or wildflower strips can help massively to improve coverage of these species into the field. Leaving crop residue and trash on the surface and leaving clods within the field will also give the spiders a diversity to their habitat and enable them to hunt effectively. Cover crops can also help to provide an ideal autumn habitat as a hunting ground and nesting site.

Spiders are highly vulnerable to pyrethroid insecticides and through good practice and management such as not spraying all fields with insecticide in one year and leaving some untreated, adhering to spray buffer zones and not spraying insecticides close to margins we should be able to minimise the risk to our populations of beneficials.

How to identify a wolf spider

Find out more about Edaphos